The universal interface of GyroPalm revolves around gesture recognition. Hand gestures have been a medium of human-to-human communication for over a thousand years.Today, gestures are still widely used to convey intent whether they are subconsciously or intentionally performed. GyroPalm aims to achieve human-device interaction through a language that is not spoken, but rather conveyed by motions. These motions can be subtly or explicitly performed within seconds. Occasionally, gestures are a convenient way to quickly communicate to another person depending on the situation or location. Likewise, the same can be applied to controlling devices around your home or office in a pleasant and seamless manner. Today, GyroPalm empowers you to interact with devices around you with single-hand gestures. Most users can sufficiently use GyroPalm with 4 to 5 simple motions, but gestures can be further customized by the user by performing new motions as desired. 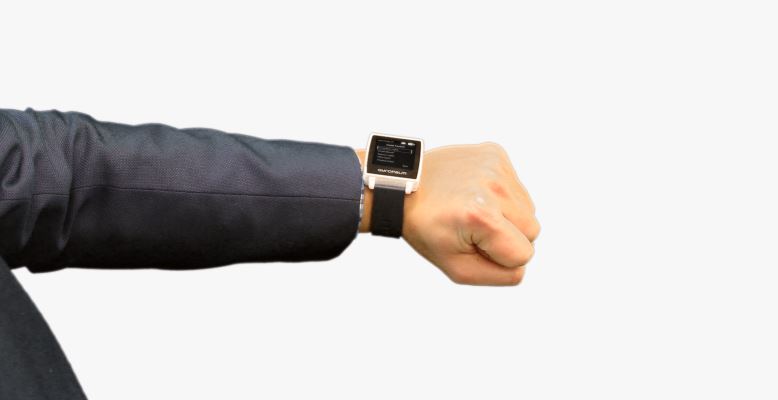 An activation gesture or trigger gesture is intended for a user to express the intention of performing a command. After successfully performing an activation gesture, the GyroPalm wearable will indicate through a brief vibration-feedback on the wrist of the user. After the vibration, the user may freely perform the pre-configured and customizable gestures as desired.

The "pull-back" gesture is the official activation gesture used to express the intention to perform commands.

The gesture is performed as follows:

The "snap-back" gesture is the alternative activation gesture used to express the intention to perform commands.

The gesture is performed as follows:

A navigation gesture is intended for a user to interact with the GyroPalm wearable's interface. The interface revolves around scrolling and selecting items from apps and menus.

The double snap gesture involves snapping your fingers twice (middle finger flicks the thumb). The snap does not need to be audible but should be performed expressively. This gesture represents the intention to "select" an item. The gesture may also be used for other actions depending on the orientation such as scrolling.

Tap on the sides of the wearable to enable/disable or toggle certain features. These commands may vary depending on mode or app.

GyroPalm offers several performing commands based on the type of device the user wishes to control.

Based on the type of device, GyroPalm consists of the following performing commands and its compatibility